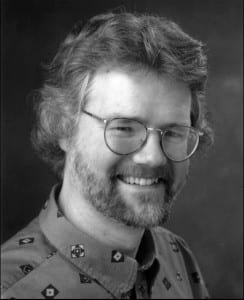 Storytelling through pictures has always held a certain fascination for Scott Gustafson; be they the moving images in animated cartoons, or the epic illustrations of N. C. Wyeth. Upon entering the Chicago Academy of Fine Art, Scott was 99% sure that he wanted to become an animator, but it was that 1% that ultimately drew him more and more into the world of stretched canvas and oil paint. “As an animator,” Gustafson says, “your contribution to a given film is, by necessity, limited to whatever character you’ve been assigned. But as an illustrator, you’re responsible for locations, sets, costumes, props, lighting, and character designs, not to mention the overall mood and emotion of a given painting. It’s about the best job there is.” Over the nearly twenty-five years that span his career, he has had the opportunity to fulfill commissions for several varied clients and publishers such as Celestial Seasonings, Playboy magazine, Saturday Evening Post, The Bradford Exchange, DreamWorks, and The Greenwich Workshop. His illustrated books include The Night Before Christmas, Peter Pan, Nutcracker, as well as two original titles, Animal Orchestra and Alphabet Soup. His last release, Classic Fairy Tales, was awarded a Chesley award for best interior book illustrations from the Association of Science Fiction and Fantasy Artists and is currently in its third printing. His newest children’s book, Favorite Nursery Rhymes from Mother Goose, was released in 2007.